This past weekend felt more like spring and we decided to get stuff out of the garage. My husband got out the hoses, hose reel, turned on the outside water, got out the patio table and chairs, and of course, the grill. My kids were demanding hamburgers a week ago (which in the snow did not seem like a good choice). But knowing the weather would improve, I said yes to burgers on Saturday. As he was fiddling with the grill, I sat on my back porch and sketched the grill’s shiny exterior. Later, we made burgers on it, and they were de-lish! 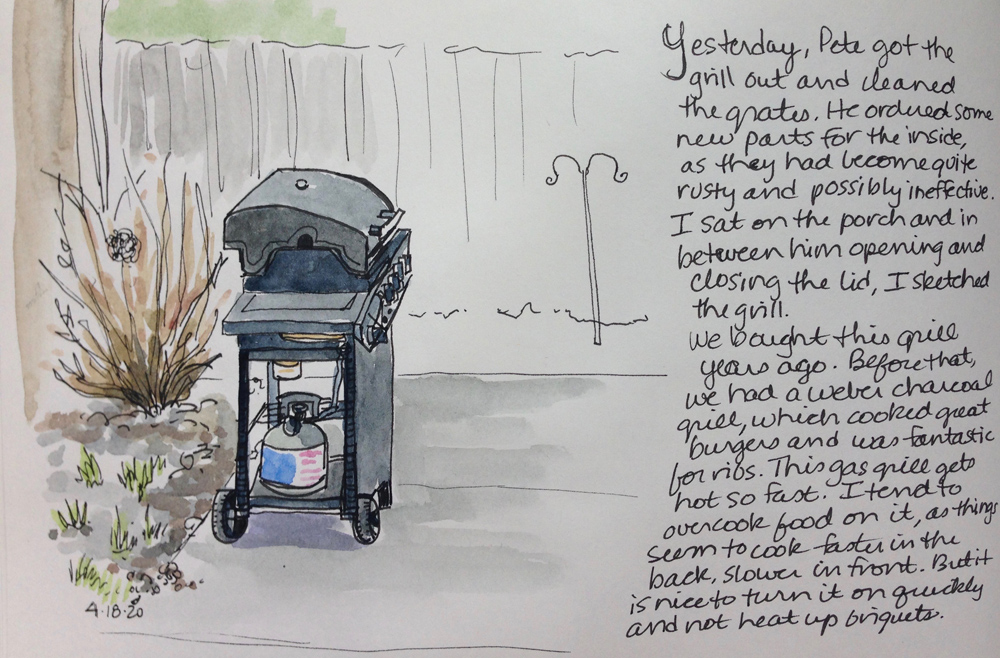 Yesterday I broke away from the comfort food idea, and embraced fish tacos for dinner. I’ve had a recipe for years and like it a lot. I usually find frozen breaded fish fillets that are in a plastic package, but I substituted Gorton’s fillets (which I don’t like as well). I had the time, so I sketched the ingredients of the fish tacos. I took the packaged fillets out of the freezer and did those first, and then put the package back in the freezer, and then took out the lime juice, the cilantro, etc…. I’ve learned that sketching and food prep at the same time can be challenging, so I sketch it piecemeal and do some things ahead of time. I had a design idea and built it from there… I ended up with pockets of space as I went along, so I added other things that I hadn’t planned on, such as the chef’s knife, the trash can, etc…. In the end, I think it flows pretty well. It’s not just a sketch of food, but a story, and I want the sketch to flow like a story, so the viewer kind of circulates around the page.

The order that I sketched the items were: the Gorton’s package, lime juice, chopped cilantro, the sauce ingredients (or maybe the baking sheet with the frozen fish), cabbage, tortillas, trash can and yogurt, cutting board/knife, chopped fish, and finally the dinner itself. I also add text at different times too, and then try to tie it all together. It’s a very satisfying mental exercise, and the fish tacos themselves were very good!