Yesterday it was a balmy 53 degrees F and I went to the Como Conservatory to sketch flowers. On my way, I passed Como Lake and noticed some brightly colored people out on the ice. People were in the water and standing on the ice. Their yellow jackets stood out against the white ice and black water. I had to take a look! I parked and grabbed my sketch stuff and went to check out the action. The St. Paul Fire Department was doing training on how to do ice and water rescues. Yellow-suited men and women took their turns floating in the frigid waters and crawling out on their stomachs on ice to rescue others. As I started to sketch, I talked to a firefighter who was curious about what I was doing. He said they had new recruits in a six-week program and they were training them in ice and water rescues. The suits were warm (for awhile) and could fill with air and float. They had a wide red flotation band that they would inch out to people in the water and wrap around their bodies, then they would pull them up onto the ice. Other fighters stood a ways back on solid ice, pulling the ropes that would ease people out of the water. After a few water sketches, including the seagulls, I went up a sidewalk to go back to my car. I was almost there, but looked behind me. I saw the parked ambulance and fire truck on the bank, and saw another group doing rescues from the shoreline, and knew it would be a good sketch. So back I went. I sat at a picnic table while the wind blew around me, and sketched the sidewalk scene (above). Firefighters in their blue and black uniforms struggled in and out of yellow flotation suits and rescued their colleagues from the water off shore. Some stood talking, others held ropes, still others waited their turns.

I have never seen people doing this type of activity and it was a great opportunity to sketch. Thomas Thorspecken, an Orlando Urban Sketcher, says: “Where there is action, go towards it, instead of away from it.” I followed his advice and got some fun sketches! 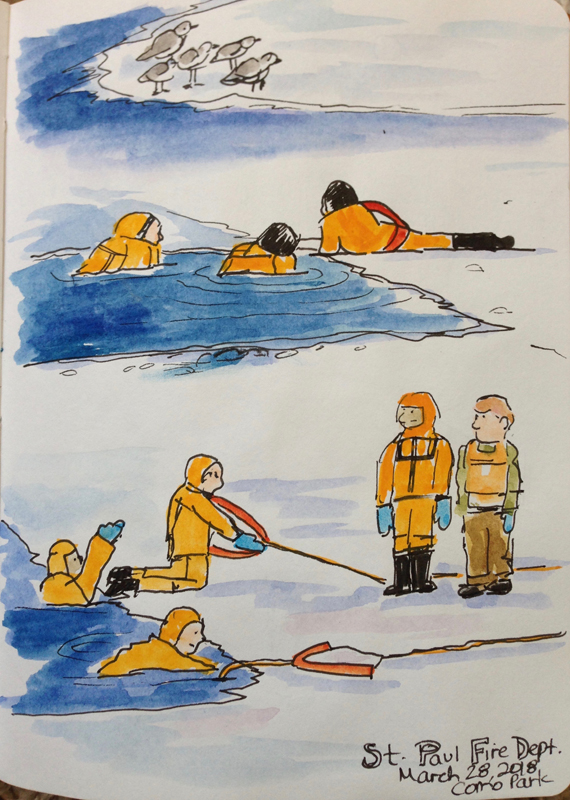